Our cruise has a very simple itinerary, very like a palindrome. 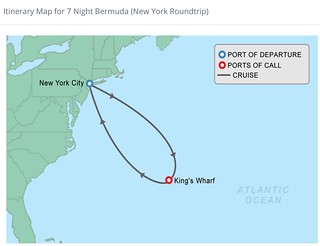 We board the ship in New York Harbor

We sail and sail…

On Wednesday morning we reach…

Perched amid the blue-green waters of the Atlantic Ocean, Bermuda is unlike any other island destination.

Lush, tropical surroundings, splendid and unusual pink-hued beaches, and a selection of cultural attractions and sporting options are all excellent reasons for visiting these islands. Furthermore, Bermuda has a distinct air of British propriety and a unique European flavor. Visitors will cherish memories of the islands’ pastel-toned homes, ubiquitous flower gardens, charming winding streets, and gracious, friendly people.

Bermuda consists of 150 tiny islands located about 570 miles off the coast of North Carolina. Collectively, these islands encompass only 21 square miles of land. Bermuda was discovered by the Spanish in the 16th century, and became an English colony during the 17th century. Today, afternoon tea and conservative British values rule. Both Bermudans and tourists zip around on mopeds, as cars are not available for rent on this island. Public bus and ferry services are readily available. Bermuda’s vacation facilities and activities include restaurants, tennis courts, and golf courses as well as marinas and beaches.

Then, on Sunday morning, back to Pier 88, New York harbor.

Hopefully, there will be more interesting stuff to post in between all that!

So, I bought a new camera for our upcoming cruise to Bermuda and land trip to Scotland.  It needs to be waterproof for snorkeling in Bermuda and because it rains a lot in Scotland.

I have been very happy with my underwater Fuji camera (XP50) that I had for many years.  Somewhere along the way, I’d lost the charging cable but I had an external battery charger.  This meant I had to open up the side compartment – very carefully – to remove the SD card and download the images to my computer and to charge the battery.

To preserve the waterproofness, the side compartment was always a pain for me.  There were a couple switches that needed to be closed just so and sometimes I messed that up and had to start again.  Naturally, I needed to get a picture NOW and managed to flub the closing of the 2 switches.

I was looking at getting an EyeFi card so I wouldn’t have to take the SD card out to get the pictures out and those cost $$.  A 32 GB EyeFi card is $99 on amazon.  AACCKKK!

While I was looking around on amazon, I noticed that my camera had been upgraded. Amazon had an XP70/75 which looked interesting – and had WiFi built in!

Then, along came a Costco catalog with an XP80 for the same price as the Amazon plus it came with some extras I didn’t need.

As it turns out, I can use my phone as a remote control for this camera.  I can see where that might come in handy!

Here’s a comparison of the old one and the newer one: http://www.fujifilm.com/products/digital_cameras/compare/index.html?m=FinePix%20XP50&m=FinePix%20XP80

Hopefully, there will be some wonderful underwater/under-rain pictures – later!

Some info I may need later –

I am able to import to iPhoto. Just put the usb (you need to disconnect from the power cord) into your computer and iPhoto will open. You need to turn the camera on.

Step One:  Turn on WIFI on camera.

Step Two:  Connect WIFI on device to WIFI on camera.