We checked out pretty early from the Airbnb.  Neither of the hosts were there so we left the key on the counter and took our luggage over to Michael’s.

Breakfast/brunch today was at Koyzina Kafe,

From there, we took an Uber to the interim Steinway Hall.  Michael and I were the last people ever to play at the last Steinway Hall, in the main room.  We played a 2-piano version of Eine Kleine Nachtmusik by Wolfgang Amadeus Mozart.   I’m sorry that the video quality is so poor:

Fortunately, the new Steinway Hall, when completed, will have built-in professional recording.

That Steinway Hall (on 57th Street) was designated a registered historic and cultural landmark in 2001. The exterior featured a bas-relief of Apollo and a musical muse by Leo Lentelli located in the lunette above the grand window at ground level.

The main room, a two-story rotunda, featured high domed ceilings, handpainted by Paul Arndt. The interior design was appointed with marble and portraits of composers and concert artists. Some valuable paintings are showcased throughout Steinway Hall, by such renowned artists as Rockwell Kent, N.C. Wyeth, Leopold Seyffert and Charles Chambers. The main rotunda seated up to 300 guests and a small symphony orchestra. The showrooms were covered with wood panels for better acoustics. In the basement of Steinway Hall was a concert grand piano bank: an exclusive collection of Steinway concert grand pianos, maintained for the use in live concerts as well as for studio recordings by performing artists.

At the end of June 2013 Steinway & Sons announced that they sold the leasehold interest in the Steinway Hall on 57th Street for $46.3 million in cash.

The current, interim location is a rented building on the address 1133 Avenue of the Americas.

They will move to their new, permanent location in February, 2016

We got to our location faster than expected and walked around the block.  I was stunned when we saw Cafe Un Deux Trois!

My best friend, Alice, and her brother (David) were living in Brooklyn and they decided to meet us in Manhattan on Saturday night.  Michael and a friend went to a comedy show while Alice, David, Tom and I walked around Times Square, just talking.  We turned down a side street and saw… Cafe Un Deux Trois.  We decided to go in to eat.

I remember nothing about the meal.  But, at the next table was Ben Gazzara,  Gena Rowlands, Peter Bogdanovitch and 3-4 others I didn’t recognize.  After about half an hour, Carol Kane came in, too.  It turned out that Ben Gazzara was in a one man show across the street which had just opened: Nobody Don’t Like Yogi.  All this made the meal very exciting.

For the last several years, every time we’ve been near Times Square, I’ve looked down the side streets for this restaurant and never saw it again until this day.

A very nice memory of Alice.

When we got back to Steinway Hall, the doors were opened and we went up to the recital room.  A friend of Tom’s came to listen, too.

Our duet this year was an old Christmas favorite, Fantasia on Greensleeves by Ralph Vaughan Williams

After Steinway Hall, we went to Tony’s di Napoli for lunch, Then rested for a bit at Michael’s.

We planned to go to a museum but were running short of time so we walked around Battery Park, took a picture…

Took a picture of the Wall Street Christmas Tree at dusk:

Then we picked up our stuff at Michael’s, took the subway to Penn Station and headed home, exhausted.

Where the pictures were taken (I didn’t take pictures everywhere and Tom didn’t have his phone): 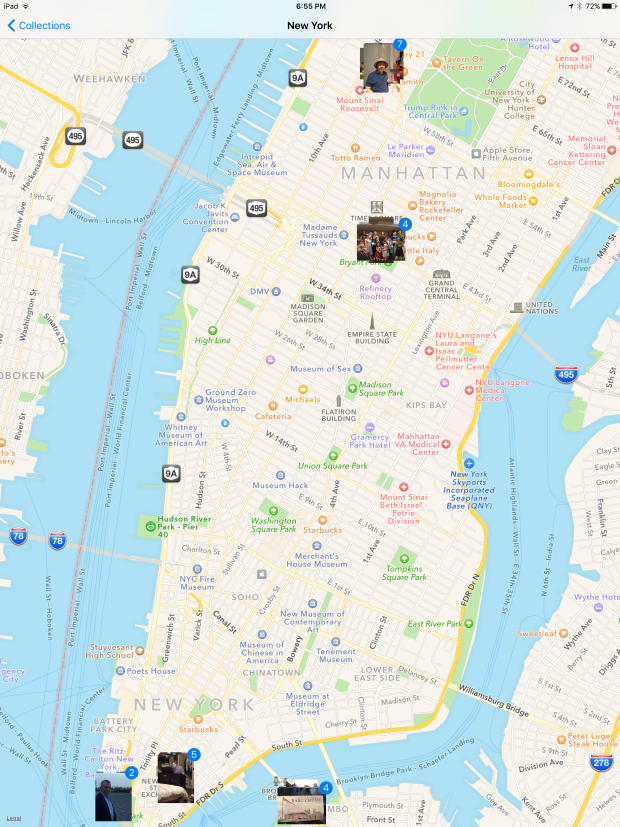 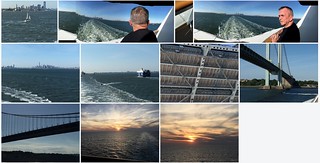 Sunday was a big rush of things.  We had agreed to skip breakfast due to time constraints, which was fine with me since I never/rarely eat it anyway (I know, I know – most important meal of the day)

As planned, Michael arrived at our hotel and we put luggage tags on his backpack, made sure we had everything packed up and got an Uber.  Tom had checked us out and we went out the door and into the Uber with all our luggage.

The ride to the temporary Steinway Hall was pretty fast and we got there about 10:30 or so.  The doors were locked but Michael’s teacher arrived a couple minutes later and we were inside.

Eddie Strauss, Sales Manager, let us use the freight elevator to haul all our luggage to the second floor/mezzanine where we could leave it outside the Henry  E. Steinway Recital Hall.

Although this is a temporary location while their new facilities are being built, it is very beautiful.

…temporary location at 1155 Avenue of the Americas.

This short-term “pop-up store” will allow Steinway to remain open as the new headquarters is being constructed, allowing for continuous service to its customers.

Steinway, well-known for handcrafting the world’s finest pianos, will now have a gallery space that encompasses approximately 18,000 s/for both retail and showroom, and a small concert hall that caters to the world’s most prominent pianists.

This video certainly doesn’t do his performance justice!

Speaking of video quality, Eddie told us that the new Steinway Hall will have professional recording equipment in the recital hall and that will make things much better for the future.

We left Steinway about 12:15 and took an Uber to the terminal. The driver left us at the terminal by the Gem about 12:35 but it was an easy walk next door to the Breakaway terminal at Pier 88.

We left our checked baggage and went through the terminal process very quickly. We never even had a chance to sit down and we were on board by 1:00. That was the fastest I have ever boarded any ship.

The Garden Cafe was crowded but we found a table without much effort. Before we finished eating, it was announced that the cabins were ready. Our cabin – 9918 – was fantastic! It was a bit tight for the 3 of us but we made it work.

The balcony was the best part. I had chosen an aft balcony on 9, starboard. We had 2 loungers, 3 chairs and 2 tables and plenty of room to move them and ourselves around.

Looking up to the other decks, we could see from the angle that ours was larger than the others above us.

There was a lot of storage but some was tricky to find. The bathroom was a good size, as was the shower. There were more shelves in the bathroom than usual and I liked being able to leave my  stuff in there. I had read that there was no conditioner in the showers so I brought my own.

I also followed advice from Cruise Critic and brought magnet hooks for the walls and those were great for hanging hats, card lanyards and so on.

The end tables on each side of our bed were pretty narrow but we made that work. The lights beside the bed were a little high up, so I’d have to get up to turn mine off. Luckily, I read a Kindle before bed so I never really needed to use the bedside light.

Our luggage arrived before 4:00 pm which was really nice.

I had been concerned about going on a ship this size but there was really no problem. The elevators were crowded the first day but after that, no big deal. I would like to point out that we mostly always took the stairs going down and walked up if it was only 2-3 decks.

We got the unlimited internet package and it was well worth it for us. On other cruises, I would get the max minutes and always be watching the time – and I would still often run out at the end. I am the web master for a couple companies so I need to spend some time online each day. This internet package was a life-saver for me and we were able to share it between the 3 of us.

We also made good use of the iPhone iConcierge app. We used it as a messenger to let others know where we were and we made reservations for 3 restaurants and 2 shore excursions with it. I also checked how our account was doing. That cost us $7.95 per phone and was well worth it.

While we were waiting to “set sail”, there was a beautiful monarch butterfly that flitted from the next balcony over to ours.  Butterflies always remind me of my good friend, Alice.  I have a monarch butterfly as my phone background.  I’d like to think that this butterfly was a reminder from Alice to have a wonderful trip.

Then, right after sail-away, the traditional First Nap 🙂  Our bed was great, very comfortable king sized with 2 pillows each.

Tom went out to a meeting, something that he would do at 5:30 every day.

We ate our first dinner in the Garden Cafe, followed by Guest Relations to get band aids, antiseptic and distilled water for Michael’s CPAP machine

Then, off to an early bed. Our steward, Bradley, turned the couch into a nice bed for our son.

Slideshow of some of our pictures:

All pictures for Sunday: