This was another easy day.

When Tom was making reservations for Costa Rica, he set out searches on both RCI and Interval.  We had one week here at Coco Bay Estates, then we were going to move to Flamingo Beach Resort.  That was ok, sort of.  Then a second week became available here but we kept the second week at Flamingo and gave it to friends, Bev and Pete.

We mostly spent the morning online checking Facebook, I worked some on a final exam that is due at 9:00 am Monday – UK time on a Coursera course – and trying to figure out how to get to Flamingo Beach Resort. 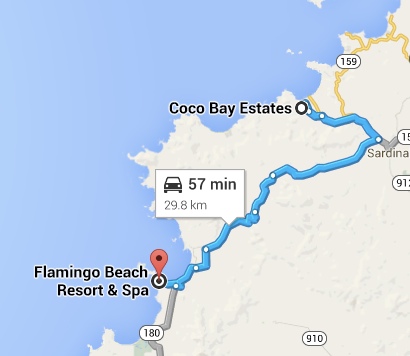 We had all kinds of maps, including the Google one at right.  The trouble with all of them is the route numbers.  None of the roads here have signs that say what the route number is, or the name of any street.

The little directions that come with that map were also no good since we were to go through the towns of Filadelfia, Belén and Huacas.

Luckily, we had been through Filadelfia before, when we went to Palo Verde but the other ones had no signs letting us know where the town limits were, “Welcome to Huacas” signs or anything.  The maps would be better if they said turn right at the fruit stand or something.

We rented a GPS when we first got here but today it had trouble acquiring satellites and we would be driving along and it appeared to suddenly download new (or updated) software, then restart.

But, as always, we persevered. 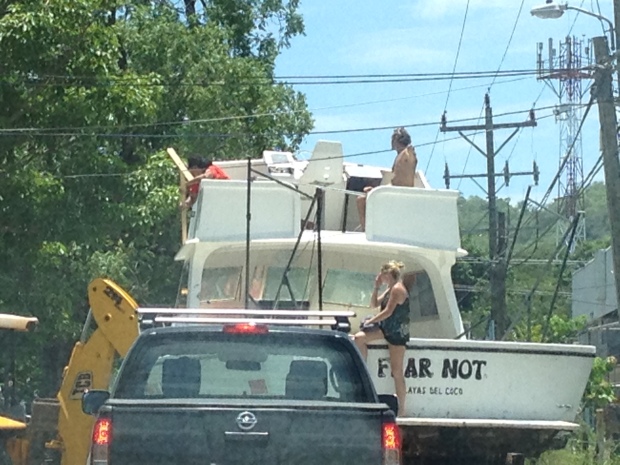 We retraced our steps towards the Liberia Airport but when we got to that fruit stand, we turned right instead of left.  All new territory now.  Between the in-and-out GPS and sporadic signs to Playa Flamingo, after only one wrong turn, we made it to our friends place about 12:45. 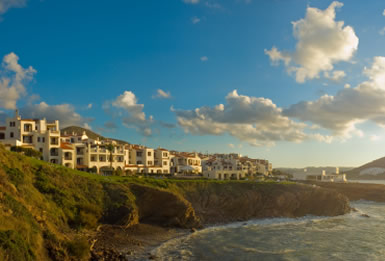 We met them in the lobby and then went and had a very nice lunch in the little outdoor restaurant.

We went out on their beach (white sand) and got a view of the buildings just up the coast.

I have to sat that their place is much nicer than ours on a whole – room is smaller – and more friendly/helpful people around.

Here, we’re kind of by ourselves on this mountain and have to drive to even get to the pool.  Most of the “staff” here seem to work for another company which is selling timeshares/vacation clubs/something slimy.  More on that later.

Our front light is still out and our elevator may or may not be working after nine days here.  We still have our 15 issues since day one and some new ones have been added.  Those will be in a summary after we get home.

But, I digress.  We had a great time with our friends but had to head home at 4:30 or so since it gets dark at 6:00.  On the way back we were stopped by police for a routine traffic stop.  Tom said it was right around Costa Rican Mother’s Day when all the family gathers at home.  That may involve drinking and/or fighting which may have triggered the traffic stop.  In any event, they let us go after seeing Tom’s driver’s license.

Most of the drive went well except when we went around a corner and there was a kid skateboarding in the street.

We got back to our place just as a big storm was brewing. 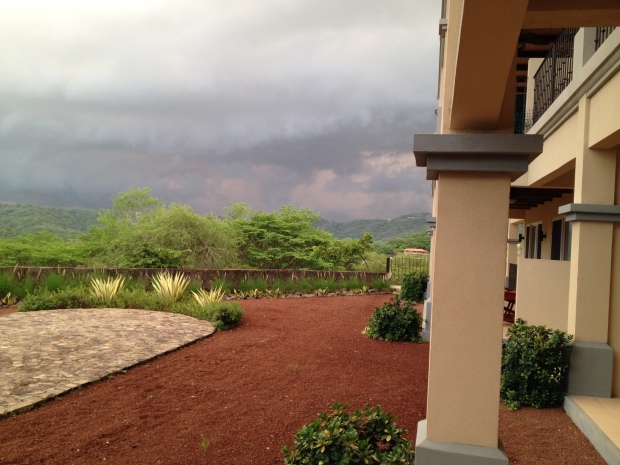 And there was a huge thunderstorm.  The power went out on one wall where modem, router and telephone is.  Then the fridge went out but it came back fairly soon.

Someone came to our door to ask if we’d reported a fire.  Uh, no.  We wouldn’t be sitting around if the place was on fire.  We don’t even have a phone to report a fire.

Finally, our modem, router and phone came back and all was well for another day…

Up all the stairs – the elevator is still broken and there is no sign that anyone is fixing it – or will ever fix it.

We had breakfast here at Playas del Coco, then goofed around for a bit.  We did a survey of the pool area.  Very nice landscaping!

The forgotten T-shirt from our ATV trip. 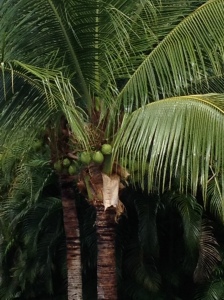 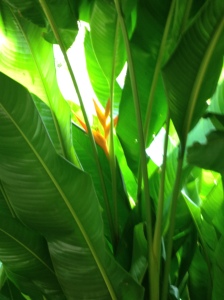 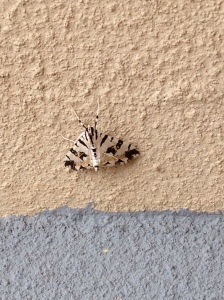 After a bit, Michael packed up his backpack (except for the T-shirt, above) and we headed back to Liberia for the Daniel Oduber Quirós International Airport.

We got there in fairly good time.  Good thing – there were no check-in machines so Michael had to stand in line with his carry-on backpack after he paid his departure tax.

The airport was redone a few years ago and is so much nicer than the one at San José, Aeropuerto Internacional Juan Santamaría, where we were 3 years ago.

After being sure he made it through Security and up the stairs to his flight, we got some coffee to go and headed “home”.  On the way, we stopped at the pharmacy for some cortisone cream.  The pharmacist there had helped him with an eye infection and she was helpful again.

After that, the Alto Mercado for groceries and a dip in our pool.