Not too much exciting in the morning.  Mostly posting yesterday’s blog post and pictures and packing up.

Tom went to Walgreens for some last minute stuff – again – and he got me the pink fleur-de-lis studded T-shirt I wore to board the ship (official boarding picture coming later).

We got our stuff together and headed to the lobby to check out.  Lots of folks coming in, off our ship!  Many had been on a B2B (Back to Back):  the same cruise we’re doing plus a week like we did on this ship in 2009 to Belize, Roatan, Costa Maya.

There was some snafu at the port and the taxi couldn’t get us all the way to the luggage drop off so he sort of stopped in the street and took our luggage across the street for us.  Then a porter took it the rest of the way.

We got into the building and into Group B.  We were at check-in within about 10 minutes and on the ship within about 30 or so.

Embarkation pictures were taken in front of a green screen which I thought was weird since I knew that we’d eventually have the ship behind us.  Whatever!

We were early enough that we got a nice round table by a window in the Garden Cafe on 12 and had some lunch.

Another couple from Anaheim, CA joined us.  They’d stayed the night at Harrah’s and this cruise (except for port charges) was comped to them.  Depending on how well they do in the casino on this cruise, the port charges may be waived.  She explained to us about how Indian-run casinos pay out compared to non-Indian and said that Harrah’s paid like an Indian casino and didn’t know why.  She was using a “buffalo machine(?)” as an example as my eyes started to glaze over.

The announcement came that our cabins were ready so there was a mass exodus.

We opted for the stairs.  On our last Jewel cruise, Michael had us walking up and down the stairs most all the time and it looks like we’ll continue the tradition.

Checked out the balcony, took some pictures, Tom took a little nap. 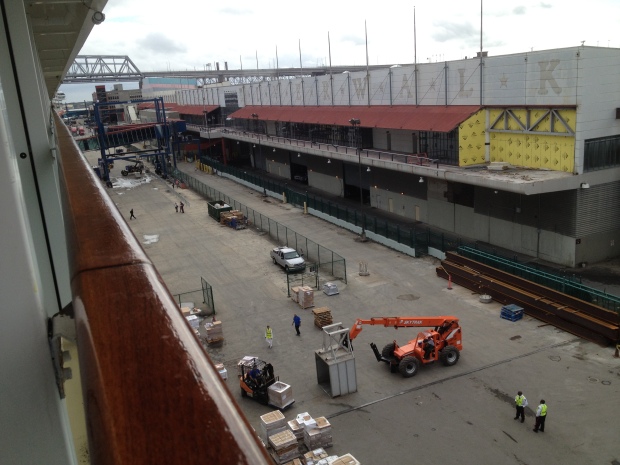 I was reading on the balcony, and this machinery rolled by on a little track.  I got a couple pictures and the guys on it said hello.  I guess it will be to wash windows later, or the ship?  We’ll see! 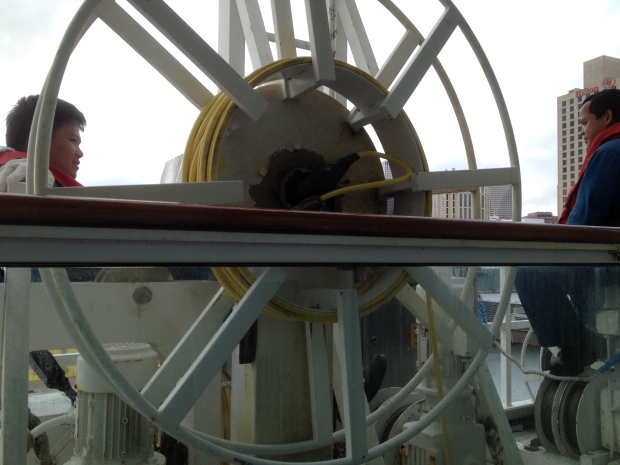 Another couple dropped by – part of their luggage had been delivered to our closet.  We opened ours and – Voila! – their stuff was in there.  They tried to tell us that maybe we were in their cabin, too, but that didn’t go over too well.

At 3:15 we went to the Tsar’s Palace for the mandatory life boat drill.  We didn’t have to take our life jackets or stand on deck waiting for stragglers.  Hooray!

After the muster, we went out on deck just to watch the last-minute luggage coming on board and ships and barges on the river. 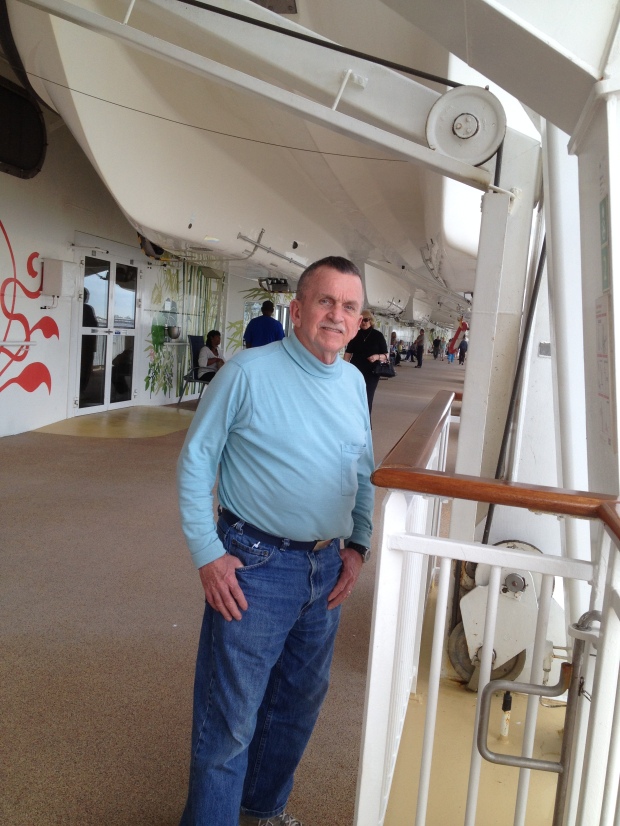 Tom under a lifeboat

About 4:00 we set out to find the Chapel since Tom was going to meet some folks there.  It turned out to be tucked away next to the Spinnaker Lounge on deck 13, forward.  I went out on deck to get some sunset pictures and listen to the band during the “Party Like a Norwegian!” SailAway.

About 5:00 the ship finally began to turn around for it’s journey down the Mississippi amid lots of cheers from the folks at the SailAway.  I must have napped just a bit…

Got some good pictures, and some sunset pictures.  I overheard one confused young woman who thought we were heading the wrong way on the river.  Hmmm… Do they teach geography anymore in school or did she plan to go to Ohio? 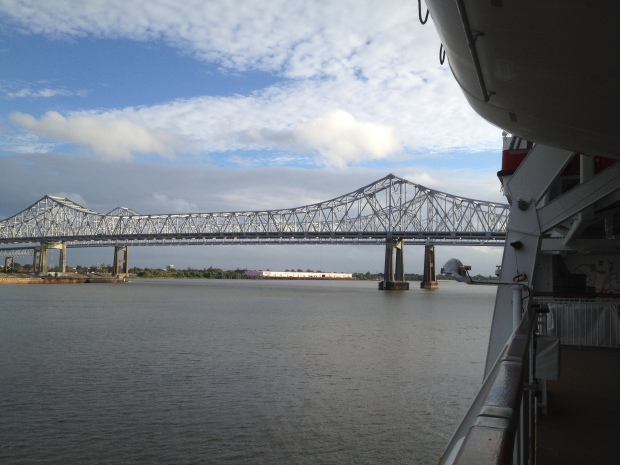 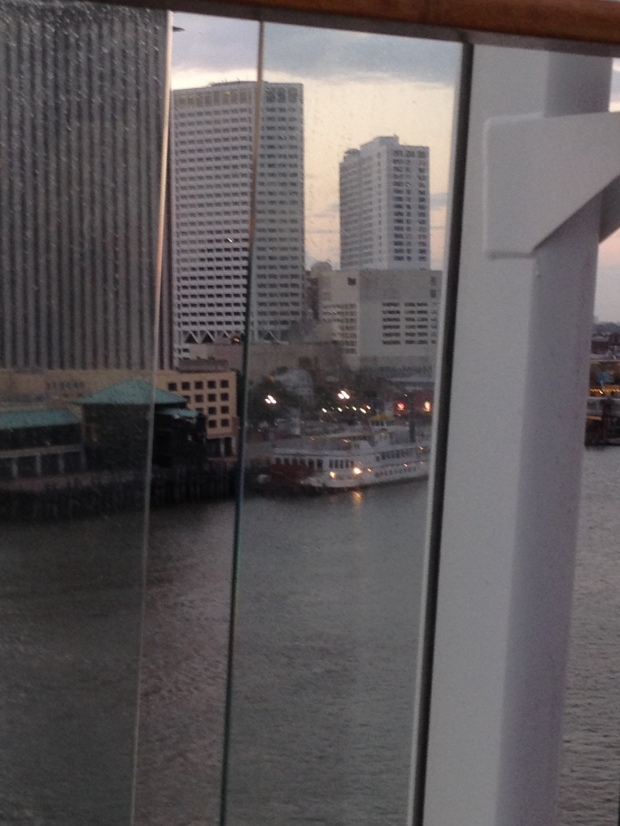 It started to get a bit chilly on 13 so I headed down to the cabin for my hoodie.  Tom was already there and so was our luggage.  Yea!

Major unpacking and figuring where to put stuff.  Everything away, suitcases under bed. Made good use of the hanging shoe bag I usually carry around. Done.

We’re doing “Freestyle Dining” so we can eat wherever/whenever we want.

On the way to Azura (6, Midship) we ran into the Photo Gallery (7, Aft).  We saw our Embarkation pictures and decided to get those.  When they added the ship in (remember we were in front of a green screen) it made it appear that portions of the ship were “bunny ears”  behind my head.  Luckily – thanks to the green screen – that’s being adjusted.  Isn’t technology grand?

We went to Azura about 6:30, when lots of folks apparently wanted to eat, too.  Because we had to wait for 30 minutes, we got coupons for free soda or champaign in the bar.  We learned that “only Pepsi products” are available on Norwegian.  Luckily, we don’t have a very strong brand loyalty to anyone.

The wait was less than 30 minutes and we had a nice table for 2.  We both had French onion soup.  He had salmon, mashed potatoes and green beans and I had BBQ chicken breast, Caribbean vegetables and sweet potato fries  Yummy!

During dinner they announced that the Saints had won.  Lots of fans on this ship!

We chatted with the folks next to us – they’re from Canada.  She was from Canada originally, he was from England.  They’d been married 36 years and this was their first cruise.  She wanted to cruise the Mediterranean and this is a “trial cruise” to see it they like it.

Their daughter, son-in-law and grandchild live in London so they only see them a couple times a year.

Dessert time.  We had coffee, of course.  I had key lime pie, Tom had lemon sorbet.  Mmmmm.

8:20 – we hustled off to the Stardust Theater to see the show.  Since we were already on 6, Midship we’d just head to 6, Forward.

Unfortunately, we had to head through the Casino to do that.  We saw the Anaheim folks from lunch and said hi but they didn’t see us.  Maybe they weren’t doing too well and wouldn’t be comped.

I always hate going through the casino.  It’s always too smoky!  I understand that our next cruise to Panama on Princess won’t even allow smoking in the casinos.  Yea!

I held my breath and we got through ok.  The Stardust Theater was pretty full so we sat in about the 3rd row.

This preview show was called “A Taste of Things to Come” and was pretty good.  The cruise director (Alex) is from Uruguay.  He gave away some champaign to newlyweds (1 and 2 days each) and some jewelry to a couple married for 62 years.  The man thought it was 66 until his wife corrected him.

The house singers/dancers were quite good.  I always prefer live singing/dancing/music to recorded so I’m pretty easy to please.  They did a song and dance about vacations that showed a lot of good energy.

A comedian came out and he was pretty funny, although I don’t like when they comment on latecomers and possibly embarrass folks.  Other than that, he was funny – and wore a silly suit.

The band was from the Philippines but they managed to channel the Beatles and did I Want To Hold Your Hand.  Apparently, they do a Beatles tribute show at some point during the cruise.  They also appeared around the ship singing I Want To Wash Your Hands at meal time.

A selection of characters from Nickelodeon shows sang and danced.  Most, except for Spongebob Squarepants and Dora, the Explorer I didn’t recognize but the kids in the audience did.  Maybe this is the Norwegian answer to the Disney ships?

The singers/dancers came back for a selection of Mamma Mia! songs like Waterloo, Dancing Girl, Mamma Mia and more.  Love it!  There was a *bit* of singing along.

Back to the cabin by way of Guest Services (7, mid) and Decks 12 (walking around we ran into the Canadian couple) and 13.

The first day, at least, we got a lot of exercise walking and climbing.

Sat on the balcony a bit.  I tried to get picture of the pilot boat leaving us but it was just too foggy.

We saw a bit of the movie Chicago on TV.  I have the movie on my iPad so it didn’t matter that I shut it down early.

Tom went to bed and I got online to do my “Pender work”.  I like to keep that site updated daily, no matter where I am.

I read for about 1 minute maybe, then fast asleep.