Going through TSA there was no issue with my refrigerated growth hormone injections.

The Omnitrope was in its own case from the manufacturer.

I put that in that new iCool weekender case I’d bought for this trip.  I chose this one for these reasons:

I had the gel pack from the iCool frozen solid and put that in a small Rubbermaid lunch bag with 2 thin ice packs,  1 on top and 1 on the bottom.  If you don’t want to read all the way to the end, this system kept the growth hormone cold for the 20 hours going and returning but the 2 thin blocks had completely thawed.  The inner iCool was mostly frozen and the growth hormone was still cool.

I had the sharps separately in a little square container with just enough for the week.I used the side pocket of the lunch bag to store my doctor’s note and clipped the whole thing with a carabiner to my backpack.

I also found a smallish sharps disposal container, although this was still kind of big for my needs, it was better than taking the whole huge one that’s in my bathroom.  This worked well and I have enough for 5 more trips 🙂

And that’s about it for medical information, at least until we get to Heathrow 🙂

Our first flight out of Dulles there was a lot of turbulence over the ocean.  Possibly due to Hurricane Harvey.  Apparently, they flew faster to get out of the turbulence and we landed early in London Saturday morning.

We walked for what seemed like forever to get to Customs.  Then, since we were coming from outside the UK we had to leave security area and go through TSA again.

I told the agent I was carrying refrigerated medications and she read the doctor’s letter.  Everything seemed like it was going well until I was flagged for more screening 😦  I had to take all the stuff out of my carefully packed Growth Hormone bag and everything else was taken out of my backpack to be swabbed down.

The next plane to Inverness was announced at 9:00 am (Saturday morning) so we moved to that gate.  Tom went to the restroom.  Turns out that gate was actually down an elevator.  I texted Tom that we had to move along.  Then they said the flight was closing.  Another text to Tom.

He arrived and we hustled down 2 escalators and onto a bus that said “Final Passengers”.  We were among the last people on the small plane.

We had to walk up stairs to get on the plane, then back down when we arrived.  I could already feel my knee hurting.  There was no turbulence on the short flight, though.

We arrived in cold/rain.  Of course.

The luggage arrived and we got our rental car and headed off.

We saw lots of sheep, of course.

We arrived in Aviemore and saw lots of bikers.  This is their answer to Sturgis, I guess. 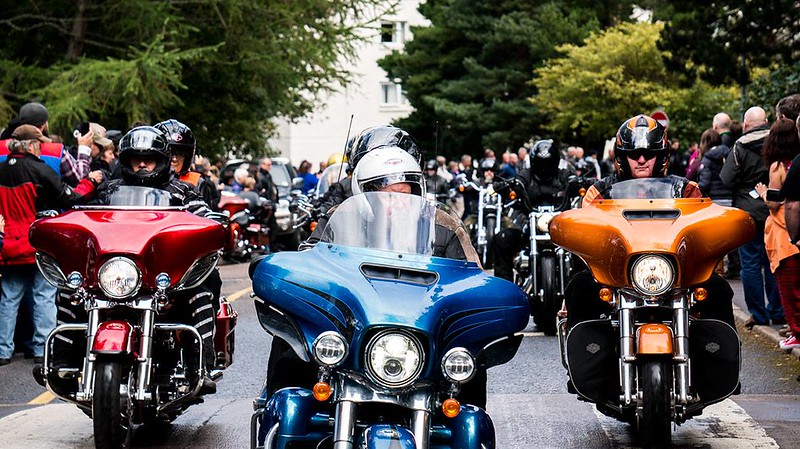 Thunder in the Glens

Thunder in the Glens has become one of the major events in the UK for Harley-Davidson fans, with people traveling from all over the world to enjoy the event. It is now officially the largest Harley Davidson rally in the UK with an ever growing number of loyal fans.

Saturday Mass ride out to Grantown on Spey starts at 12.00 noon. Sunday 2.00pm to 4.00pm – charity rides on the back of a Harley-Davidson in Rally Village.

From Harleys 2017 Thunder in the Glen aviemore

We arrived at our place.  Luckily, we knew where it was because we’d been here before.  According to RCI (the timeshare company that got us this place, it’s called Macdonald Craigellachie Chalets.  According to the place, it’s called Macdonald Spey Valley Golf and Country Club, or Dalfaber Golf and Country Club or Dalfaber Village or…???

We couldn’t check in until 4:00 pm so we had a bite to eat while we waited. 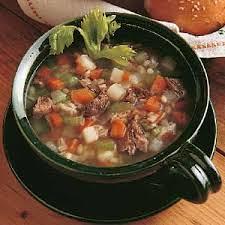 I had Scotch broth.  I haven’t had that for years and years – yummy!

Scotch broth is a filling soup, originating in Scotland (DUH!). The principal ingredients are usually barley, stewing or braising cuts of lamb or mutton (hopefully not relatives of those sheep we saw earlier), root vegetables (such as carrots, swedes [rutabaga], or sometimes turnips [aka neeps]), and dried pulses (legumes, most often split peas and red lentils).

Cabbage and leeks are often added shortly before serving to preserve their texture, color and flavors.

Tom had a club sandwich – and lost a crown 😦

The club room had a Snooker table.  I didn’t know what snooker was, although the table looks like a pool table.  It sounds quite complicated according to Wikipedia.

We finally got the key and started driving around trying to find our chalet. Then we went back to main desk for better directions and finally found it.

After 20 hours at 4:15pm  (11:15 am at home) I finally removed the growth hormone from the cases.  The 2 ice packs had melted but the GH in its weekender case was still cool and that gel pack mostly frozen.  A good solution except for issues at Heathrow.

Then off to Tesco for some grocery shopping.  The streets were crowded with bikers, drinks in hand, oblivious to traffic.  There was a long queue in the grocery near their customer toilets.  Lots of folks wandering around the store, not necessarily with any items in their carts.

We watched a show on BBC about royal life, divorces, Diana and Captain Phillips, a movie we saw on a cruise

I didn’t read my Kindle at all first night. Instant sleep!