Getting there is half the fun?

A friend had given me a trial membership in CLEAR (CLEAR uses your eyes and fingerprints to confirm your identity – helping you breeze through airports, stadiums and more.)  I had registered online and all I had to do was have them scan our eyes and take fingerprints.

Since this was a new thing, at least at Dulles Airport, there were many people in line for the initial scanning.  One party was taken somewhere else during this process.

We got ours done and we were good to “breeze through the airport”.

Um, no.  the scanner didn’t recognize any of my scans, although they tried several times.  We were moved to yet a different line.

All that took longer getting to TSA than if we had not tried the CLEAR.  I’m not sure if we’ll keep this after the trial period or not.  Great idea, needs some work.

I had bought yet another container to help transport my Omnitrope. 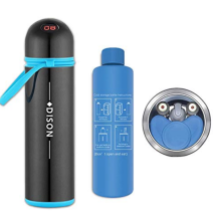 I ordered a new travel container for my growth hormone.  The last “system” was kind of clunky.  It worked fine but required too many components.  This one looks like it will fit in the water bottle compartment of my backpack.  I definitely don’t want another failure.

I’ll be posting a review of the Dison Care Insulin Cooler Travel Case Medication Cooling Bag when we get back  I find it amazing that I ordered the black for $59.00 with a 10% coupon.  The same thing in white is $65.00 with no coupon.

This “bottle” fit perfectly in the water bottle compartment of my backpack.

Going through TSA, I told the woman outside the scanner that I was carrying this and had paperwork.  She handed me the paperwork back and put the Dison in a separate container to scan.

I went through and a TSA agent told me very rudely that I should know that I wasn’t supposed to carry liquids.  I explained again that it was refrigerated, prescription medicine and I had paperwork.  He had me get over to the side while he called in another agent and they started inspecting everything.  The new agent said that they had never seen anything like this.  There was a little thermometer on a longish strand (I wasn’t using it) but apparently, it looked like a way to detonate the whole case.  After a lot of swabbing, discussion and annoyance on my part I was allowed to leave.

I decided that I will never fly with growth hormone again.  It is not worth the time and hassle to me.

This case will be fantastic for train/car/walking/anything but flying.

I had previously found a smallish sharps disposal container, although this was still kind of big for my needs, it was better than taking the whole huge one that’s in my bathroom.

As it turned out, I only needed it in the ho(s)tel in Copenhagen.  The cruise had a sharps container in the bathroom.  I had noticed that on a previous cruise and was so glad to see that they are providing this service.

I carried the actual sharps separately in my checked baggage.

After 12 hours at 8:15am Copenhagen time (2:15 pm at home) I finally removed the growth hormone from the bottle.  The ice pack was still pretty hard and the GH was still cool.  Next time, I’ll try the little thermometer thing (I need to charge the batteries first) and see how accurate that is.

A good solution except for airport issues.  Did I mention that I will never fly with GH again?

The plane left 2 hours late, which is never fun. Despite being 2 hours late departing, the flight itself was pretty good.  The seats were 6 across and Tom and I had the 2 by the window on the left side.

They served a nice dinner and breakfast before we landed.  They had bottles of earphones, water, blankets and pillows at every seat when we boarded, which was a nice touch.  I got to see two movies (I didn’t like their headsets, though.  They kept falling out of my ears. Next time I’ll buy some cheap wired earphones for something like this.)

I saw the new live-action Aladdin.

And the new Dumbo.

I watched this because I’m a huge Tim Burton fan. I’m also a huge Michael Keaton fan, ever since Beetlejuice and I didn’t recognize him in this film  I knew he looked familiar but not until the final credits did I know.

Views from our window:

According to the onboard map, this was Poland.  Tom wasn’t sure about that.

Friday, September 13, we arrived in Copenhagen, Denmark.  Getting our bags and clearing customs was incredibly easy and we were on our way.

I had looked this up before we left and the Uber website says that there IS service.  Hmmmm.

We got to the Hotel Copenhagen and checked in.  We chose this hotel due to a kurfuffle with Marriott.  I had booked a room in the Copenhagen Marriot for just Friday night, then realized that we probably needed Thursday so we could rest up when we arrived early Friday morning as check-in would have been at 3:00pm Friday afternoon.  I left a note to that effect on the booking page and Tom called a couple weeks before we left just so they would know what we were trying to do.  The “customer service” person was really rude and told us that we might lose the room because we didn’t check in by some cutoff time on Thursday night – while we were in the air – in some different timezone.  So I canceled that and got the Hotel Copenhagen instead.

I was moving really fast doing that (and I was teaching a piano lesson at the same time.  OOPS!) and didn’t notice that the reviews mentioned that this was a former hostel.  The fact that only some of the rooms have private bathrooms should have been a clue!

After checking in, we had to find our apartment.

We went out the front door of the hotel, turned left past the bakery, left again at the Italian restaurant.

Next, find and open the outside door of #32 with one key.  (They left this out of directions:  Climb 8 stairs to landing hauling all luggage) get into a small elevator, take it up to the first floor. Get out, open glass doors, walk across the balcony to #13, and use another key to get in.

We unpacked a little and I found that the comb that was “always there” wasn’t so Tom went to store across the street for a comb, snacks and fruit.

After the naps, we went back to the store for batteries. Tom’s electric razor had been on in his suitcase during the flight and died.  The elevator in the ho(s)tel had stopped working.

We took a taxi to Tivoli gardens

What a fantastic place that is.  We were lucky that we went when we did.  They’re currently closed to set up for Halloween. The park opened on August 15, 1843, and is the second-oldest operating amusement park in the world.

After walking around at Tivoli, we went back to the hotel.

After asking the desk clerk for recommendations, we walked to the Cafe Alma.

These were the best fries I have ever had anywhere. The menu said it came with a salad.  It turned out that it was inside the burger!

I also had a drink called Dark and Stormy made with fever-tree ginger beer.  I was interested in this because it’s the national drink of Bermuda.  We have been there several times but I never tried the Dark and Stormy so this was my big chance.  This was the only alcoholic drink I had for the entire trip.

After Cafe Alma, we walked home and I took my GH out of the fridge to warm up a bit.

I fell asleep and woke up a couple hours later.  Then, I decided not to take it because I was too tired and fell back asleep.

We walked 2.1 miles which is amazing given the time changes, flights and so on.