Woke up fairly early, got dressed.  I listened to the  soundtrack from An American in Paris on Spotify. Michael and Lingyi met us downstairs at our building and we walked over for brunch at Open Kitchen. We’d been there before so I got some old favorites from the buffet.

Michael walked her to the subway and we Ubered to Bryant Park for the bagpipe concerts.  By then, it was pouring rain.

I told Michael a bit about bagpipe playing and kilts/fly plaids in general.  My knowledge of bagpipes was slightly less than Wikipedia’s:

The scale of the chanter is in Mixolydian mode, which has a flattened seventh scale degree. It has a range from one whole tone lower than the tonic to one octave above it. The drones are tuned to this tonic note, called A. The nine notes of the chanter scale “low G, low A, B, C, D, E, F, high G, and high A”. However, the A pitch of most pipers and pipe bands currently is somewhere around 480 Hz, which is actually sharper than standard B♭ at 466.16 Hz. Historically it was indeed flatter, as evidenced by recordings, and extant instruments.

Highland bagpipe music is written in the key of D major, where the C and F are sharp (despite the key-signature usually being omitted from scores). Due to the lack of chromatic notes, to change key is also to change modes; tunes are in A Mixolydian, D Major, B Minor, or occasionally E Dorian.

Traditionally, certain notes were sometimes tuned slightly off from just intonation. For example, on some old chanters the D and high G would be somewhat sharp. According to Forsyth (1935), the C and F holes were traditionally bored exactly midway between those for B and D and those for E and G, respectively, resulting in approximately a quarter-tone difference from just intonation, somewhat like a “blue” note in jazz. Today, however, the notes of the chanter are usually tuned in just intonation to the Mixolydian scale. The two tenor drones are generally an octave below the keynote of the chanter (low A), and the bass drone two octaves below, but they may be retuned to suit the mode of the melody. Forsyth lists three traditional drone tunings: Ellis, A3/A3/A2; Glen, A4/A4/A2; and Mackay, G3/B3/C2.

The first group was Shamrock & Thistle Pipes and Drums from New Jersey.

They even had a djembe (drum) which was cool.  Unscottish but cool.

We found the “best public bathrooms in the world”, according to reviews Michael had on his phone.

Then another group played.  Some of them were very young.

We saw a high school group wearing raincoats and playing actual band instruments waiting to line up for the parade.  Raincoats. Ha!

“There’s no such thing as bad weather, just the wrong clothing, so get yourself a sexy raincoat and live a little.” ~ Billy Connolly

Here’s the Shamrock and Thistle in the parade:

We walked to the theater for Hamilton. Just as well we had tickets for that since it was pretty cold/rainy for the parade. The concert in the park was a better substitute for the parade.  We walked by Un Deux Trois again.  I said no to lunch there.

We were early for Hamilton so we got coffee, banana and pastry at Corso Coffee across the street. 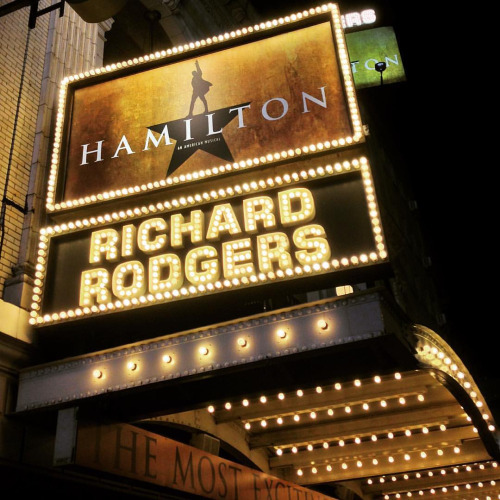 When we saw the Hamilton line moving, we went over.  Michael had to buy these tickets from a reseller so we didn’t have seats together.  He and I sat together and Tom was about 20 seats away.

Fantastic show. Tom liked it.  I was afraid he wouldn’t because of the hip-hop music / rap but I was wrong.

We walked to Rossini’s for dinner.  We stopped at those restrooms in Bryant park and I tried them out.  Drama between women’s matron and men’s attendant over a water bottle in trash.  <Sigh>

We got to Rossini’s early for our reservation. I had cream of broccoli soup and spaghetti, key lime pie and coffee.  I also had a Black Russian which meant no Vicodin later.

We were so early that we missed the opera singer, although she came in just as we were leaving.  Just as well since we didn’t have any obscure selections for her this time.

We ubered back to our place.  We listened to a bit of Hamilton (The Kings first song), watched some stuff on YouTube, including the king teaching Steven Colbert how to do the walk, Bicycle band (video coming tomorrow!), Top Secret Drummers, Geocaching, handbell Pirates of the Caribbean and more.

After Michael left, we watched some Downton Abbey, had ice cream and off to bed.