We ended going out to breakfast here at Pueblo Real and I took the pictures of the flowers afterwards.

After exchanging our reservations since Michael can’t join us, we ended up going to Rainmaker Rain Forest. That’s a privately owned rain forest down a long gravel road.

On that road I took the picture of the cow/bull or whatever it was with the huge buffalo hump.

True to it’s name, it was pouring when we got to rainmaker. We decided to go inside anyway.

Because it was raining, we had to take most of our pictures with a waterproof camera, old-style that will need to be developed before uploading.

There was lots of climbing, suspension bridges, slippery places, rain. What fun!

I was pretty ok until we saw the red band around the tree that meant a worker had spotted a snake in it that morning. I don’t know if the snake has to move the band when he moves.

Tom went very quickly by the tree and didn’t see the snake. I looked into the tree and did see it. With the help of Wikipedia and google I identified it as a green vine snake when we got back. It’s venom was “serious cut not lethal” to humans.

After I saw him, what little adrenaline I have got depleted very fast and I had some trouble finishing the walk. This was the day (of course!) that I didn’t bring any extra cortisone.

Finally got home and took the cortef and Tom went back out for gas.

After he got back we got phone calls from our Thrifty friends who were off somewhere, in the rain, getting dark out…with a flat tire. Tom gave them phone numbers of the office here, Thrifty and others. He was thinking of trying to find them but they somehow got help from someone closer to the scene.

We went out to dinner and major rains, thunder and lightning. This is an open-ish restaurant so we had rain blowing in…and a crab wandered through.

Finally, we figured it was time to go and the ice restaurant folks lent us an umbrella.

Time to head to bed. Out early tomorrow for a sail/snorkel/lunch trip.

This is not my video but it’s a good one of where we were today. 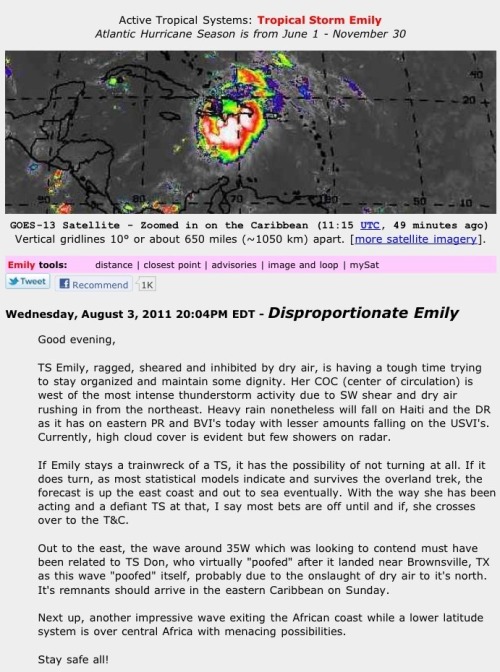 A bit of disappointment. Michael can’t join us due to the tropical storm/hurricane Emily. His flight was rescheduled but he would get here so late. He’d be here for less than a day.

So, we’re canceling whitewater rafting, moving the sailboat to tomorrow and trying to find activities for today and Saturday, maybe!