I, too, was stunned to hear the news this morning and continuing throughout the day.

It was just something unbelievable.  My husband and I were on a Land Rover 4X4 tour of the off-road areas of Barbados when we first got the news.

At first, when we got the very first news, around 9:30 am, I thought that it was some tale that the driver was weaving…and that there would be a punchline.  As the day wore on, more interest was on the radio than on the tour.  Some of the people in our Land Rover were from New York City and they were terrified for friends and family.

What an awful day in history this is, one of those that we’ll always remember where we were when we got the news.

Like the rest of you, I am stunned, absolutely shocked that this could happen, using our own planes, no less.  I cannot imagine the terror of the people on those planes, or in the World Trade Center…or the Pentagon.

The rest of the story:
The year of 911 my mom and my son had been with us for the first week. My son had to be back at college so on Sunday he shepherded my mom through the airport, customs and all and got her back home before he headed back to UMass/Amherst on Monday. Thank goodness they got back before the mayhem started!

On Tuesday we were out on a 4X4 from Island Safari with our favorite guide, Zario. Zario is a fun guy and and very knowledgeable about Barbados and world events. We were very happy to have him again because it was the “luck of the draw” which driver/guide we got.

I remember that morning being kind of stressed already – I was having trouble with one of my contacts and I was just grumpy.

Zario picked us up first, one of the benefits of staying at The Crane – everyone picks us first for everything and drops us off last. Then he picked up another couple from New York City who were staying at Bougainvillea.

The tour started off through the fields, down cliffs as usual. Zario had the radio on in the background. When we got to the first stop he told us that there was a “problem” in New York. That it seemed that a plane had hit a building. We thought that there was going to be a punch line somewhere. There wasn’t.

As the tour went on, the news got worse. The couple from NYC was very worried about relatives.

By the time we got to lunch and met up with the other 4x4s everyone had heard. We were in a little chattal house restaurant, the TV was on CNN and everyone was just watching in silence and horror. Usually this lunch is very festive and fun. Not a care in the world. Not today.

We left the New York people off at their hotel and went “home”. The TV was full of New York news, then Pentagon news. We know people who work at the Pentagon. The news just got worse as we went along.

We were basically stuck in Barbados.  Phones to the US didn’t work well, email was slow to non-existent, all we knew was what we got on CNN, incessantly.  My mother and son had been with us the week before and had just flown back the Saturday before.  I was so glad that they had gotten back home ok, then my son off to college.

We were supposed to fly home on the next Saturday, but if was iffy if that would happen since the airports were closed for the longest time.  We were flying into the DC area. The phone lines to the Barbados airport and to American Airlines were always busy.

Finally, we decided to give it a shot, packed up and went to the airport to see if we could fly out or not.  They could only guarantee the flight as far as Puerto Rico.

The San Juan airport was crowded with Americans trying to get home, flights being canceled due to closed airports, people sleeping all around the airport, using backpacks for pillows.  It was a very difficult time.

We did finally leave for home later that night.  This is what I wrote the next day…

I flew on American Airlines last night (9/14/2001).  We left Barbados on time but the connecting flight, originating out of Aruba was very late, and we waited for a long time in San Juan, Puerto Rico.

After that flight had arrived though, we were all sitting around, hoping they’d board the plane soon.  All of a sudden, there was cheering in the hallway.  We turned to look – our pilot and crew were marching up the hallway with a huge American flag.  He stopped and talked to us.  He explained that the copilot would hang that flag outside his window as we taxied out of Puerto Rico and into Dulles.  The flag was making the rounds of American flights all over the country and that the yellow streamers hanging down were being signed by all the American crew members.  He posed for lots of pictures (I have some I’ll post later, when my eyes are less bleary!), then, as they were going to get the plane ready, he asked us in a loud voice if we were ready to fly to Washington and everyone cheered.

Along the way, he thanked us so much for having faith and flying (like we had any choice!).  The headphones for the movie and the drinks were all free on this flight!  He also told us that there were a lot of fighter planes in the Washington to NY corridor and not to be surprised if we were intercepted by one, who would just be making sure that we were “who we said we were”.  I thought that would be kind of neat to see, but I didn’t see them.  We arrived in Dulles (Washington, DC) with a jet fighter escort.  At the time, that sounded so comforting, but it turned out that they had been there to shoot us down, if we’d made any funny moves.

Then, when we arrived at the terminal, the captain said that we were back in “the land of the free, and the home of the brave” and got some more cheers.

It was a memorable flight for someone like me, who is terrified of flying under the best of circumstances.

9/14, San Juan Puerto Rico:
After the crew marched down the hallway.

The captain, letting others have a chance to fly the flag.

This young woman lead us onto the plane.

…that we left Barbados, but not really.

Yesterday morning I got up really early and took a few last minute sunrise pictures:

Sunrise at The Crane, Barbados

Tom texting at the airport

This one is my new favorite, though:

Sunrise at The Crane, Barbados

Then we got packed up and ready to leave by 10, then started reading, texting, just hanging around.  Brenda stopped by and we talked quite a bit while Tom was finalizing his packing shutting down the computer and all.  Brenda’s youngest daughter teaches English in Spain so they only see each other about every 3 years – except on Skype.

We stopped to check out and ran into Bernice.  She’s the first person I ever really met in Barbados and it’s always special to see her again.  She’s often on holiday at least part of the time we’re there, though.  She’s thinking about her next summer plans – either a 3-week conference or a cruise.  What to do!

Then, Paul stopped by.  He said that Culpepper Island will be partly finished by March and ready for tours when we get back next summer.  I can’t wait to see that.  It seems that we can trade our place for that as an even trade whenever we want.

Tom texting at the airport

I think I have picture or Tom texting, calling, using his phone everywhere!

We were to leave from Gate 12.  Then they said Gate 13 so we went there and went to board.  Unfortunately, the shuttle was outside Gate 12 so we walked outside to the shuttle, got on and rode back past Gate 13.

Luckily there weren’t too many people on the flight to Miami so we were able to stretch out a bit.

We got to Miami about 15 minutes early so had to wait for a gate.  Finally off the plane and going for the l-o-n-g walk to Immigrations and Customs.

The line for Immigrations was really long and moved slowly.  We got near the front and were informed that we were not US residents, we were US citizens and needed to be in a different line, further away.  The woman who told us that said we could get near the beginning of the other line.  Of course, the official at that line said we couldn’t and Tom had some words with her.  Luckily, we weren’t denied admission!

Finally through that and on to get luggage and on to Customs.  That went pretty quickly and dropped off luggage so they could put that back on the plane.

We next had to wait in line for security – again – then a Sky Train to our real gate.  This process took about 2 and a half hours.  Last year doing the same process, we had time to get dinner at TGI Friday’s.  We were the last ones on the plane, just made it before they closed the doors.

We got to Dulles just before midnight.  I called my mom and she said that the power was out in most of our neighborhood due to a tornado that had touched down in the afternoon.

Our luggage was the last off the plane.  It even had a tag on it that said “Last Bag”.  Who knew?

Another taxi and finally, home!  We were lucky and had power.

My plan for Sunday was that Tom would go to a meeting and pick Mimi up on the way back.  I would call Mom and we would go to Kick Off Sunday at church.

What really happened was Tom woke up for his meeting and accidentally got shaving cream in his eye.  He told me he was going to the emergency room.  I asked if he wanted me to take him but he thought it would be better if I picked up Mimi. OK

Off he went…then came back and said he had a flat tire.  By now, I was definitely awake.

I emailed Thia to let her know I could pick up Mimi any time and said I’d call after 9.  She emailed back to ask if I was home.  I was going to respond since obviously she was awake but Tom called first.  He was at the ER and they were going to hold him for a few hours to get the acid (who knew shaving cream had acid in it?) all out.

Just as I hung up from him, Thia and Mimi appeared at the door.  Thia was on her way to church and they were going to her Mother-in Law’s afterwards and figured we’d want Mimi back before that. 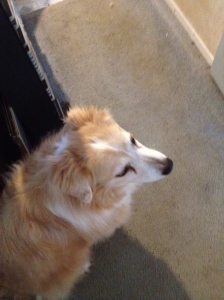 I’m not sure Mimi was happy to be here with just me.  At Thia’s there are a couple kids to play with as well as a cat and Mimi’s sister, Penny.  I’m pretty boring, especially because I was more interested in napping than playing. I gave her a Frosty Paws and that helped for about 2 minutes.

Eventually Tom got home with antibiotics, eye washes and other stuff.  Mimi was delighted to see him!

I’m glad I cancelled students tomorrow.  The Piano Room needs a LOT of work before I can teach again.  And laundry needs to be done…